How Cameras Work-The Parts of a Camera

​Learning the basics of how cameras work and knowing the functions of the key parts of a camera can be very beneficial when you are learning about photography. It will help you make decisions concerning proper exposures when you are taking pictures. It can also help you decide which camera ​features are most ​important to you when purchasing a camera, or camera lens. 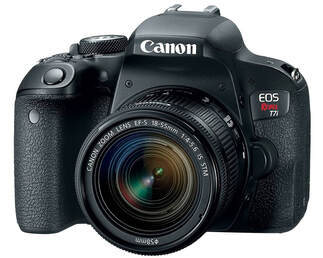 Canon T7i Digital SLR Camera
Overview: Digital cameras produce pictures by "capturing" or recording ​the characteristics of the light from a scene or subject. The main parts of the camera that are involved in the process are the camera body, the camera shutter, the camera lens, the ​lens aperture, and the camera's image sensor. The camera's LCD screen is for previewing and then viewing the captured image.

Depending on the type of camera, the camera lens may be permanently attached to the camera, (fixed lens) or removable. (interchangeable lens)

​When you take a picture, the colors and characteristics of the light that the image sensor is exposed to is recorded by the image sensor and then saved to the camera's memory card. (all objects reflect light and colors to varying degrees. That reflected light is actually what your pictures or images are made of)

Digital Camera Memory Cards: Although a memory card is not a permanent fixture to the camera, it is essential if you want to save your images and transfer them to your computer, or share them through social media and other outlets. Lower priced and lower storage capacity memory cards will work fine for casual photographers.

Photographers that will take a lot of pictures and videos will probably need a memory card with more storage and the ability to quickly copy the digital images to the memory card.

​​Consider the SanDisk 64GB Extreme Pro memory card available through Amazon.
This memory card has a lot of storage for still images and is good for 4K videos as well.
​The light that is captured by the camera's image sensor and saved to the memory card can then be reproduced on your camera's LCD screen, on a computer screen, or as a print on photo paper. Next, some of the parts of a camera and their functions are explained individually.​ 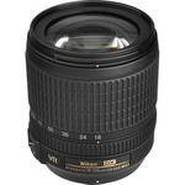 Digital Slr Camera Lens
​The Camera Lens: The purpose of the camera lens is to focus and direct the incoming light. The camera lens consists of one or more precisely shaped pieces of glass or plastic called elements. The light coming through the elements is "bent" or directed to the image sensor where the information about the light is captured

The camera lens is an extremely important part of the camera. That is because the type of lens and the quality of the lens being used will contribute greatly to the sharpness and overall appearance of the picture.

It is important to note that lenses on Basic Compact Cameras are fixed and cannot be changed. Lenses for Digital SLR Cameras and Compact System Cameras can be removed and changed to better suit a particular photo shooting situation. There is a little more about different types of cameras covered further down in this tutorial.
​The aperture opening size also helps to determine how much certain areas of the image will be in focus or out of focus. (that is called ​Depth of Field)

​Read the tutorial about the Camera Lens Aperture for more details about ​this part of the camera and its function
The Camera Shutter: As previously mentioned, light enters the camera through the lens. However, the light coming through the lens cannot reach the image sensor until the shutter release button is pressed and the camera shutter is opened.

Once the camera shutter is opened, the light flows in and the camera's image sensor is exposed to the light. The amount of time the shutter remains open is called the shutter speed. Shutter speeds are usually expressed as seconds or fractions of a second. 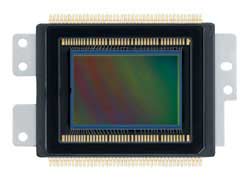 APS-C CMOS Image Sensor
Camera Image Sensors and Pixels: The focused light coming through the lens is directed to the digital camera's image sensor. That focused light is "captured" or read by the sensor prior to being stored in the cameras memory card. The image sensor has a grid with millions of microscopic light information gathering elements called "photosites."
​
Each one of these photosites are better known as pixels. There are one million pixels in a Megapixel. Each photographic image consist of millions of pixels. In general, the more pixels in a picture, the better the quality of the image.

The size of the camera's image sensor is also a factor in the quality of an image. Larger sensors have larger pixels and are able to reproduce colors as well as shadow areas more accurately. The image sensors in Digital Slr cameras are much larger than those in basic compact cameras.

However, digital camera technology has advanced to the point where compact cameras and even cell phone cameras with their smaller sensors can produce excellent images by ordinary standards. The cameras with larger image sensors are geared more toward photo enthusiasts and professionals.

​For more on sensors, please read Digital Camera Sensors.
Screens: Just about all cameras manufactured these days have LCD (Liquid Crystal Display) screens. The LCD screen is the part of the camera that allows you to view your subject or scene before taking ​the picture. The LCD screen also allows you to see your images immediately after you take a picture. 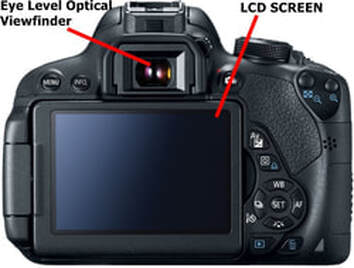 When viewing a scene on the LCD Screen (before taking the picture), you are using what is called the "Live View" Mode.

​Once you press the camera's shutter release button and the shutter opens, the light coming through the camera lens is directed straight to the camera image sensor, recorded and then displayed on the LCD screen.​

​Additionally, exposure setting information such as shutter speed, aperture setting, ISO setting and histograms can ​be seen on the LCD Screen.

Why leave your best family and vacation photos just sitting in your camera, computer or phone? Beautifully display or share them with a Nixplay Smart Digital Frame!!
​​

The mirror system found in Digital SLR cameras is a major reason for its larger size. It also contributes to the higher price of the camera.

Of course there are more working parts in the camera that contribute to producing an image. However, the functions of the other parts of a camera revolves around making sure the above mentioned parts are working properly together.

Types of Cameras: Now that you have an understanding about the basics of how a camera works, it might be a good idea to take a look at the various types of digital cameras available to consumers. The primary types of cameras on the market today are Basic Compact cameras, Advanced or Bridge cameras, Digital SLR Cameras and Compact System cameras.
​
Basic Compact Cameras like the Canon Powershot ELPH 190S are by far the most commonly used camera by casual photographers. Just about all of the settings are automatic and they are also commonly called point and shoot cameras. The image sensors are somewhat small but produce images that are more than acceptable for the average photographer. The lenses on basic compact cameras are fixed and cannot be changed.

Advanced or Bridge type cameras can be classified with basic compact cameras but have features that give the photographer more control over certain exposure settings than a basic compact camera. Many bridge cameras similar to the Canon SX530HS also have lenses with very long zoom ranges and are sometimes referred to as Super Zoom Cameras.


Digital Single Lens Reflex Cameras like the Nikon D5600 are the most versatile of the digital cameras. These type cameras are also referred to as Digital SLR cameras or DSLR cameras. Digital SLR cameras give the photographer full manual or semi-automatic control over exposure and other settings. They also have a full automatic mode same as other cameras. The lenses on Digital Slr cameras can be changed and there is a wide array of lens focal lengths available that can be used with them. Digital Slr cameras also have the largest size image sensors of non professional consumer cameras.

Compact System Cameras (aka Mirrorless cameras) like the Sony Alpha a6100 generally have the same capabilities as Digital Slr cameras but are smaller in size because they do not have the mirror system found in Digital Slr cameras. Compact system cameras are usually just slightly larger than basic compact cameras. Many of them also have the same APS-C size image sensors as non professional DSLR cameras. Also, the lens on a Compact System camera can be changed to suit whatever focal lengths best suit the photographer.

Although there are differences in the quality of the pictures, as well as differences in the sizes and shapes of the above mentioned types of cameras, they basically produce pictures or images the same way. Check the tutorial Types of Digital Cameras for more details on the differences between various types cameras.