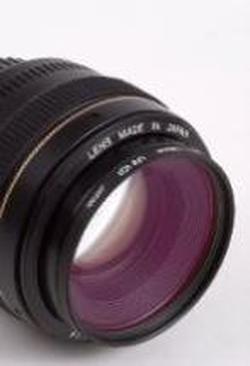 Function of the Camera Lens: The basic job of the camera lens is to gather and focus the light reflected from a scene or subject. As the reflected light rays enter the camera lens and pass through the elements, they are directed to the camera's image sensor.

The function of the camera's image sensor is to "capture" the colors and intensity of the light rays that enter the camera through the lens.

The captured light can then be reproduced as the exact image that was seen through the camera's viewfinder or LCD screen when the camera's shutter release was pressed. 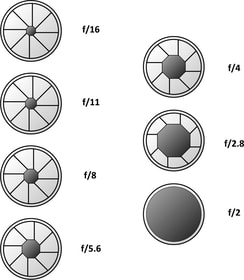 Lens Aperture Diagram Showing F Stops (Click to Enlarge)
Lens Aperture: The lens aperture is the part of the camera lens that determines how much light is allowed reach the image sensor. The lens aperture opening can be adjusted to make it smaller or larger. The different aperture settings are called F Stops.

Take a look at the aperture diagram for examples of how changing the F Stop affects the size of the aperture opening.

The camera lens aperture setting can also affect the depth of field in an image. Depth of field is a reference as to how much of the area around ​your subject will be in or out of focus.

Camera Lens Focal Lengths: An important feature you should know about any camera lens that you are planning to use is its focal length.

A standard or "normal" lens lens is loosely defined as one that will give a field of view similar to what the human eye sees. However, what is "standard" can vary depending on what type camera, lens and image sensor is being used. The 50mm lens field of view from the old 35mm film cameras is  practically the same as the view from today's full frame image sensor digital cameras. (when equipped with a 50mm lens)

​So, a 50mm lens is considered a standard or normal lens for those types of cameras. Note: The Canon 6D Markll is an example of a Digital Slr with a full frame sensor.

A standard lens for a Digital Slr camera with an APS-C size image sensor would be around 35mm because that size lens would produce a field of view pretty close to that of a 50mm full frame digital camera. (or a 35mm film camera) There is a little more about this subject towards the end of this tutorial.

The main types of camera lenses are zoom lenses and prime lenses.

Zoom Lenses: A zoom lens makes it possible to photograph different views of a scene (closer or further away) without changing your position or changing the camera lens.

Zoom lenses can be used at various focal lengths and are also called variable focal length lenses. These types of lenses are found on both fixed lens cameras (meaning the lens cannot be changed or removed) and interchangeable lens cameras.

The magnification capability of a zoom lens is usually expressed as a range. For instance, 18-55mm and 55-250mm focal lengths are two common zoom lens ranges. The magnification, or focal length range of a lens can usually be found right on or around the barrel of lens. The two images below show examples of areas where the focal length and maximum aperture openings can be found on the camera lens.
​The maximum aperture opening of a zoom lens (or any other lens) is usually included in the description of the lens. For instance, a typical description of a zoom lens would be an 18-55mm, F3.5-F5.6 lens. (the F3.5-F5.6 are lens aperture settings. They represent the widest aperture opening that can be used at the shortest and longest focal lengths of the lens) For more on zoom lenses please check Types of Lenses-Zoom Lenses.

In any case, the actual zoom range in millimeters of a compact digital camera lens can still be found on or around the barrel of the lens.
.
Prime Lenses: These are camera lenses that have a single focal length and are also know as fixed focal length lenses. When using a prime lens, the view or perspective only changes if the distance between the camera lens and the subject changes. In other words  you will have to move in closer or move further away from your subject to get different views when using a prime lens.

Although prime lenses have fixed focal lengths, they are available in wide angle, standard, and telephoto focal lengths. These are removable lenses and should not be confused with a "fixed" camera lens which refers to the lens being permanently attached to the camera.

Prime lenses are very sharp focusing lenses compared to some zoom lenses. That is partly due to the fact that there are fewer elements in a prime lens for the light to pass through on its way to the camera image sensor.

These types of lenses are lighter and not as bulky as zoom lenses which makes them more convenient to carry around. Prime lenses are generally less expensive than zoom lenses and will give you high quality images without breaking the bank.

Many prime lenses have large aperture openings such as F1.8 and F2.4 which make them great for shooting in low light. They also come with a much more affordable price than zoom lenses with comparable aperture openings. Check out the variety of Prime Lenses available at Amazon.com

The only slight disadvantage to using a prime lens is that you may have to move in closer or move further away to frame a subject to your liking. (unless you choose purchase more than one in different focal lengths)

With that being said, just know that primes lenses are available in a wide variety of popular focal lengths such as 28mm, 50mm, 85mm, 135mm and 200mm to name a few. There are also many Macro prime lenses available to use for close up photography. Please read the tutorial Prime Lenses for more on these types of lenses.

The image below shows what is meant by different fields of view. 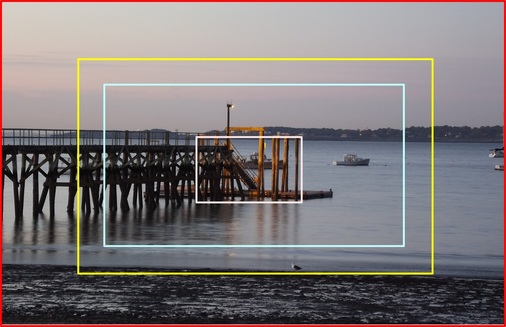 Image Sensor sizes shown are not actual sizes. Sizes shown here are for comparative purposes only.
​Red Rectangle: The entire area that is framed in the red rectangle represents the field of view that you would see through a 35mm film camera or a digital camera that uses a full frame image sensor. The image capturing area of film and a full frame image sensor measures 36mm X 24mm.

Yellow Rectangle: The area inside the yellow rectangle represents the field of view seen when using a Digital SLR camera like the Nikon D5600 which has an APS-C image sensor. (23.5mm X 15.6mm)

Blue Rectangle: The area inside the blue rectangle represents the field of view of a Mirrorless Camera like the Panasonic Lumix GX85 which uses a Micro Four Thirds size sensor, (17.3 mm X 13.0mm)

Pink Rectangle: The area inside the pink rectangle shows the field of view of a basic Compact Digital Camera like the Canon Powershot Elph 190IS which has a 2/3 size image sensor. (6.16mm X 4.62mm)

The primary reason for the differences in the field of view is because todays digital cameras use different sized image sensors to capture light whereas the older 35mm cameras used a standard size film. Also, many of the digital camera lenses are smaller than the lenses used with 35mm cameras.

The light capturing area of most image sensors is smaller than the area on film that captures light. However, high end digital cameras like the Nikon D750 DSLR  use what are called full frame image sensors. Those types of image sensors are about the same size as 35mm film.

Therefore, a digital camera with a full frame sensor will produce the same field of view as a 35mm film camera. That is, as long as the same size lens and focal length is being used.

In order to compensate for a loss of viewing area due to smaller sensors and lenses, today's camera manufacturers equip their digital cameras with wider angle lenses. A compact camera with a 1 2/3 image sensor and a lens set at 4mm can actually show a field of view equal to a full frame Dslr camera lens set for 28mm.

So to conclude, the 35mm camera lens field of view is the standard to which current digital camera lens views are compared. For more about this subject take a look at the tutorial, 35mm Equivalent Focal Lengths.