One of the most important aspects of digital photography is taking pictures that are exposed "correctly". A picture that is exposed correctly won't be too dark or too light for most peoples tastes.

It then uses mathematical calculations to determine the overall average brightness/darkness of the entire scene or portions of the scene so that it can be reproduced as a digital image.

Those calculations work well most of the time but they are not always perfect. For more on the subject of exposure, please check Camera Exposure Basics.

Metering Modes: There are three commonly used metering modes built into today's digital cameras. They are the Center Weighted Average, Evaluative (also called Matrix), and Spot Metering modes. The following is a brief explanation of each of the metering modes.

Note: The green colored or tinted areas that are overlaid on the images represent the primary portion of the scene used for reading and averaging the light from the scene. The small yellow rectangles represent auto focusing points. 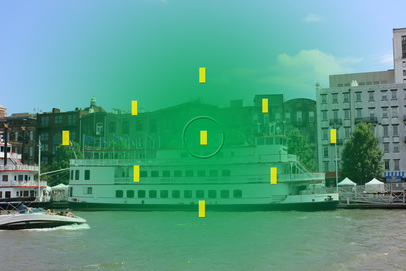 ​The green tinted area of image #1 represents the approximate area that would be called the center of the frame for center weighted average metering..

When the center weighted average metering mode is used, the light from the entire scene will be read and then averaged to calculate a good exposure setting.

However, the camera's light metering system  will concentrate on, and give the center area the most weight (approximately 60-80%) when averaging the light from the scene.

The light measurements from areas outside the center are averaged in as part of the light in the whole scene but are given much less weight in the exposure calculation.

So the center weighted average mode will be less influenced by very bright or very dark areas around the edges of the frame.

The center weighted average metering mode will work well for most average picture taking situations. That is, provided there are no extreme contrasts of light and dark in the center area that could throw off the exposure calculations. 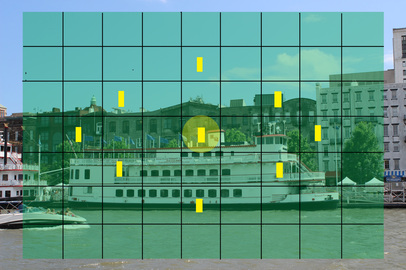 Image #2, Evaluative Metering grid. Also known as Matrix metering
Evaluative or Matrix Metering Mode: The evaluative metering mode measures light in numerous areas of  the entire frame. Those areas are called zones and the light from each one is analyzed individually. The evaluative mode is the default metering mode for most of today's digital cameras.

Image #2 below is an example of an Evaluative Metering grid for a Canon Digital Slr camera that has 63 separate zones. Some cameras will have less zones, some will have more.

The evaluative mode is known as Matrix Metering in Nikon cameras. You may also see evaluative metering referred to in general as Multi Segment metering.  ​

​The exact method of calculating the exposure value from the light readings in these individual zones can vary from camera to camera.

​However, the following factors will generally be taken into consideration with most cameras when the evaluative mode is used:

Individual zones with focusing points that are actually focused on a subject or area in a scene will carry more weight in exposure calculations.

The reasoning behind that is the assumption you are pointing and focusing the camera on your primary subject.

The distance to the subject, the position of the subject, as well as the background and foreground brightness are also considered in the exposure calculation when the matrix metering mode is used. .

The Nikon matrix metering mode also compares the scene or subject you are shooting to a data base of thousands of similar images to assist in choosing the best exposure settings.

While there is much estimating and calculating involved with the Evaluative Metering mode, this metering mode works well the majority of the time and can be more accurate than the center weighted mode in many situations. 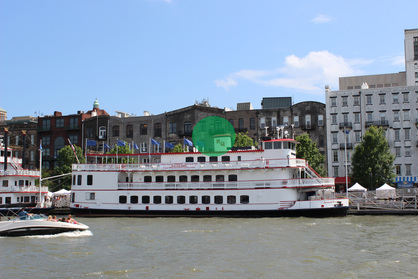 The Spot Metering area might be 1-5% of the frame area and it is usually in the center of the frame. However, some advanced cameras might offer multiple spot metering areas within the frame.

There is no Partial Metering photo example included in this section because it is basically the same as spot metering. The only difference is that the metering area is slightly larger than the area covered with spot metering.

The Spot Metering mode works best in situations where there might be a wide variation of light in a scene. A common situation where spot metering might be helpful is when you are taking a picture of a back lit subject.

Back lit subjects will often be underexposed due to the camera's meter system reading and setting the exposure for the light behind the subject.

In those cases, point the camera so that the metering spot is directly on the subject.

​That way, the camera will attempt to set an exposure based on the reflected light from the subject (or the area being metered) rather than reading the light behind the subject.

Take note that when you use the Spot Metering mode, areas in the image that are much darker or lighter than the  spot metered area might be exposed lighter or darker than you may prefer. However, it may be a sacrifice you might have to make if exposing the main subject is the primary goal.

Now you know about the camera's metering functions. If you would like to read a little more about how the camera works to produces properly exposed pictures, read the Camera Exposure Basics tutorial.  It will also help you to better understand what happens when you use your cameras' different metering modes.