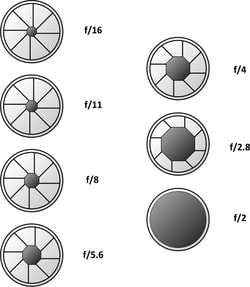 Lens Aperture Diagram
The aperture is part of the camera lens. You may also see it referred to as the diaphragm. It controls how much of the light that enters the camera lens reaches the image sensor which is located inside the camera. The image sensor is where the light from a scene is absorbed and converted to the picture or image that you are trying to capture when you press the camera shutter button. Just as the pupils in our eyes expand and contract depending on the amount of light around us, the lens aperture opening can be made wider or smaller to let in more, or less light as it is needed.

The camera aperture setting, along with the camera shutter speed and ISO  settings determine the exposure for an image.Those three functions are commonly known as the "Exposure Triangle".  Exposure in photography is a reference as to how much light reaches your cameras's image sensor and how light or dark your image will be.

In addition to controlling the amount of light that reaches the image sensor, the camera aperture also has an effect on the depth of field in image. Depth of field will be explained a little later in this tutorial.

For now, take a look at the lens aperture diagram. It shows how the different aperture settings are designed to allow more or less light from the lens into the camera.

In general, the less available light there is, the wider the aperture opening may need to be in order to obtain an acceptable exposure.

The size of the aperture openings are referred to as F stops. The range of F stops will vary depending on the camera lens.

Shown below are two camera lens aperture charts. The first chart lists aperture settings as full stops. (the same F Stops that are shown in the camera lens diagram)

The second aperture chart shows F stops in 1/3 increments which are probably what you will find in your own camera lens. For the purposes of this article we will explain how the camera aperture works when full F stops are used.

​That is simply because it is easier to explain how the camera aperture works using the full F stop numbers. However, the principle will be same if the 1/3 increment F stops are used.

Note: Not all camera lenses will have aperture openings as wide as F2. Lenses that have F stops of F2 or lower are higher priced. However, just about every digital camera will have an aperture opening that is at least as wide as F3.5. A camera lens with a maximum aperture of F 3.5 is adequate for everyday photography. Photographers that will be taking a lot of pictures in low light situations might find lenses with maximum apertures larger than F 3.5 more useful.
​Always remember that smaller F stop numbers allow more light into the camera than the larger F stop numbers. For example, F4 allows about twice as much light to reach  the camera image sensor as F5.6. On the other hand, F11 allows about half as much light to reach the camera sensor as F8. Take a look at the two images shown below.
The only thing that was changed when these two pictures were taken was the camera aperture setting. The shutter speed and ISO setting are the same in both pictures. As you can see, changing the aperture setting by a full stop in either direction increases or decreases the amount of light entering the camera and reaching the image sensor. So, simply increasing or decreasing the lens aperture setting can produce a lighter or darker image.

However, in real life picture taking situations, an increase or decrease by a full stop or more is not always needed. That is why cameras are programmed with smaller F stop increments similar to the ones listed in the second aperture chart shown above.

It is important to note that not all cameras have manual or semi-automatic modes that allow you to manually change the aperture setting to a specific F stop. Manual adjustments can be made with Digital Slr cameras, Compact System Cameras, and some Bridge Cameras.

Most very basic compact cameras are programmed with automatic settings and you cannot choose a specific F stop that you might want to use. On the other hand, if you use your camera's scene mode, the camera will choose an aperture setting as well as a shutter speed that will usually work well for the specific type of scene you are photographing.

Note: As advances in digital camera technology are moving forward at a rapid pace, you may be able to make some manual adjustments when using newer smart phones and basic compact cameras. Check your camera or phone manual to see if manual adjustments can be made with your device.

Camera Lens Maximum Aperture: The maximum (widest) lens F Stop is listed right on the camera lens. On a fixed focal length lens it might be listed as 1:3.5 or 1:2.0 depending on the largest aperture setting (F Stop) available for that particular lens.

Depth of Field: In addition to controlling the amount of light that enters the camera, the lens aperture has an effect on the depth of field in an image. Depth of field is the area of adequate sharpness behind or in front of the subject that the lens is focused on.

​The two images below are examples of wide depth of field and shallow depth of field respectively. In both pictures the focus point was lower portion of the salt shaker. (the one that is closest to the camera.)
As you can see in image #3, the salt shaker and the pepper shaker behind it are both in pretty sharp focus. As a matter of fact, everything in the background as well as the foreground has the appearance of being in focus. The F stop used in image #3 was F16. Image #3 is an example of a picture with wide or deep depth of field.

Image #4 is an example of shallow depth of field. Although the focusing point was the same as in image #3, the salt shaker in front is the only thing in the picture that is in focus. The entire background area and a small area of the foreground at the bottom of the picture is out of focus. The F stop that was used is F3.5.

The difference in the look of these two pictures was determined by the aperture setting. (the shutter speed had to be changed to maintain a correct exposure, but the shutter does not affect depth of field)

So remember that using a large F stop opening like F4 or wider can contribute to making an image that has shallow depth of field. An F stop such as F11 or smaller will tend to produce images with wide or deep depth of field.

While the camera aperture plays a significant part in the depth of field of an image, it is not the only factor. The distance from the camera lens to the subject also plays a part when it comes to depth of field.

In closing, remember that the lens aperture is part of the exposure triangle. If you would like more information about how the lens aperture, camera shutter, and ISO work together as far as obtaining a desired exposure for an image, read the Camera Exposure Basics tutorial. ​