The vivid colors, shapes, and various appearances of flowers make them one of the most popular photography subjects. Getting a really nice picture of a flower can be very rewarding and is usually not too difficult. However, there may be times it might be a little challenging. The following are a few useful tips on how to photograph flowers.

A Digital Slr camera like the Nikon D3500 or a compact system camera like the Sony Alpha a6100 will give you more control over the camera settings and may produce higher quality images . However, keep in mind that it is the photographer, not the camera that takes great pictures.

It is not usually necessary to use a Tripod when taking pictures of flowers as long as there is enough available light to use a moderately fast shutter speed. (lets say 1/60 second or faster) . However, in some flower photography situations a tripod may help you get sharper pictures of the flowers.

That is because when you take very close up pictures, even the slightest camera shake can cause blur which will show in the picture. (especially when using a lens set at a long focal length) Using a tripod along with a remote shutter release or the camera's self timer will greatly reduce the chance of you taking blurred pictures due to camera shake.

Composing Pictures of Flowers: While there is no set rule to use for photographing any particular type of flower, the way that you compose your photos of flowers can enhance the overall look of your images.

​For instance, if your primary subject is only a couple of flowers that are embedded in a wide area of leaves or different flowers, move in closer. Try to fill a good portion of your viewfinder or LCD screen with your subject.
​​Flower picture #2 is a closer shot of the same flower that is in the middle of picture #1.​​ Picture #2 shows more details of the flower and gives the viewer more of a focus point. It is also a more balanced and less busy picture

That was easily accomplished by moving closer to the flower and using the camera in a vertical position instead of the horizontal position. Don't forget that you can also use your lens zoom to get a closer shot. 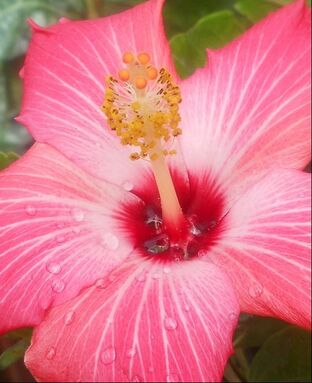 Flower Picture #3
Another effective technique for photographing flowers is to move in even closer to the flower or use your camera's zoom to take a nice tightly cropped shot similar to picture #3..

Taking a very tightly cropped shot as in picture #3 will show more details of the flower that might not be noticeable in a picture that is taken from a further distance.

The fine details of the flower and the rain droplets on the small flower in picture #3 are more noticeable because it was framed as a very close tight shot.

Also, if possible, try changing your position or the angle of the camera when taking your pictures so that you have different views of the flower(s) to choose from.

When taking shots similar to those, you want to make sure that there is balance in the image. In other words, you usually won't want a few flowers on the left, then a gap, and more isolated flowers to the right or somewhere else in the image.
​Flower picture #4 has a large plant in the middle. Yet it does not totally dominate the image because it is complemented by large leaves and the colorful small flowers around it. So there is balance in the picture.

Picture #5 is a group of flowers that are all similar to each other. Compare this picture to image #1. It was previously stated that picture #1 had no particular focal point. Neither does picture #5. However, the big difference between picture #1 and picture #5 is that there is more consistency and balance in picture #5.

While there is not one flower in picture #5 that is the center of attention, the focus point is all of the colorful flowers which are spread pretty evenly.

​Quite often, using the rules of Basic Photo Composition can work well with flower photography. However, it is ok to be creative and break the rules at times as long as your picture contains something interesting that will draw and hold the viewers attention.

Flower Photography and Light: As long as it is light outside, you can take some very nice pictures of flowers. However, the quality of the light will affect the overall look of your pictures. The quality of light is a reference as to whether it is a clear day outdoors with bright sun, or a cloudy, overcast day.

The light on cloudy or overcast days is subdued and very even. Any shadows that are cast will be very soft and barely noticeable. (pictures taken in the shade are included in this category) That is why many photographers prefer to take pictures of flowers on overcast or cloudy days.

Take a look at flower picture #6. It was taken on an overcast day. There are no sharp edged shadows anywhere in the entire picture. The overall look of the flowers is quite soft and they are somewhat evenly lit.

It is also possible to take nice pictures of flowers in bright direct sunlight. Take a look a flower picture #7. It was taken on a sunny day. There are shadows on parts of the flowers but they do not detract too much from the overall look of the picture. Everything looks quite natural.

The type of shots you might want to avoid are pictures where part of the flower or surrounding area is brightly lit and the other part is in deep shadows. That look is usually not too appealing.​
​​In any case, do not forego taking pictures of flowers just because it is a sunny day. Just be aware of deep shadows and how they may possibly affect the look of your flower pictures.

Quick Flower Photography Tip: When you get close to your flower subject(s) on a bright sunny day, your body or the camera might cast an unwanted shadow on part of the flower or the area around it. So check to make sure that you aren't casting any unintended shadows into the area being photographed.

On the other hand, if possible, you might want to intentionally cast a shadow on the entire flower and the area around it by blocking the sun with your body. That way you will avoid having very bright sunlit areas on one part of your subject and then deep shadows on the other part.

Of course, where you are standing and the the position of the sun in the sky will determine if it will be possible to intentionally cast a shadow on your subject.

Using Flash? Generally, pictures of flowers taken in natural light look more realistic than those taken using a camera flash. Taking pictures with a flash at full power might make the image look somewhat washed out and unnatural. However, using a flash at 1/2 power in some cases might be useful for reducing the effect of dark shadows.

However, as you get closer to the flower, (lets say about a foot away) the camera lens might not be focusing on the exact area that you intended to be the focus point.

Take a look at picture #8. The camera was pointed towards the general area of the flower in the center of the frame when this picture was taken. However, the camera actually focused on the area behind the flower. This was corrected by adjusting the position of the camera and by using the focusing point(s) shown in the LCD screen so that it focused on the intended area. See picture #9
So, it is a good idea to check your camera's LCD screen frequently when taking close up pictures of flowers to make sure the camera lens is focusing on the correct area.

For those who have cameras with manual focusing in addition to auto focusing, you will find that using the manual focus option will eliminate some focusing problems when photographing flowers.

Another problem you may have when photographing flowers very close up is that the camera lens will not focus at all. That usually happens when you are closer to the subject than the camera lens minimum focusing distance. So you might have to back up or change your position to get the camera lens to focus.

Shoot From Different Angles: You can get different perspectives of the same flower(s) just by moving around a bit. A picture of a flower at ground level taken while standing or bending is fine. However, you should also try a shot or 2 from a lower perspective. That would require you to perhaps get down on one knee when shooting. Also try moving left and right. You might be surprised to see that the flower as well as background areas will look slight different from different angles.

Macro Mode: Another option you have is to use your camera's Macro Mode. The macro mode is specifically designed for taking pictures of small objects like flowers or perhaps insects. Using the macro mode tells the camera that you are trying to take pictures at a closer than usual focusing distance.

The macro mode is usually identified on your camera by an icon picture of a flower on one of the cameras' buttons, or in the menu. The macro mode is an automatic shooting mode so the camera will take control of certain things like the aperture and shutter speed settings. Keep in mind that different lenses will have different minimum focusing distances.

Exposure Settings: The exposure settings for flower photography are basically the same as those used for photographing most other subjects. The camera lens aperture and shutter speed settings will depend on the amount of available light.

​Those factors would include the camera lens to subject distance, the focal length of the lens that is used, and the camera aperture setting.

Don't forget that the camera aperture setting also influences the depth of field in a picture. For more details about this subject, check the Depth of Field tutorial.

So make flower photography your next project for taking pictures. Half of the job is done since flowers are always either beautiful or interesting subjects. The next step is to put your creativity and photography skills to work as you create the next great picture of a flower. Good Luck!