​How to Photograph Fall Foliage/Autumn Leaves

​The beautiful colors of the autumn leaves makes fall foliage a great photography subject. Once the leaves reach their peak colors, a great shot is just sitting there, waiting to be taken.

All that is required to take nice pictures of fall foliage is a little general knowledge of Camera Exposure Basics and an understanding of the basics of picture composition.

The type of camera you use won't make too much difference. You can get greats shots of the fall foliage with a basic compact camera like the Sony DSCW830 or with a Digital Slr camera like the Nikon D3500

There are no cut and dry rules for taking pictures of fall foliage. Each person's taste or style may be different. However, the following suggestions may help to change the pictures you take from just ok to great.

Colorful Plus Interesting: It's easy to get excited when you see a tree that usually has green leaves, now full of bright yellow or orange leaves. However, is that enough to make a picture of the tree interesting to others?

​Try to think about more than the beautiful colors when composing pictures of the fall foliage. Try including things like a lake, a stream, a winding road, or even a house if those things are in the area where you are taking pictures .However, always make sure that the colors of the autumn leaves remains the primary focus point of the scene.
For instance, there is a pretty decent sized portion of the sky included in image #3. (also see pictures #1 and #2) Yet the bright colors of the fall leaves are not overwhelmed by the sky. The partial reflection of the colors in the water shown in image #3 also adds a little extra zip to the image. Overall, the trees, the sky, and the water go together well, making this a pretty nice fall foliage picture.

Try taking your pictures of fall foliage from different perspectives. That would involve moving around or zooming your camera lens in or out to see which angles or views work best for you. Once again, there is no set rule that you must follow when composing pictures of fall foliage.
​
Still, you might want to check out a few of the basic principles of Picture Composition and use what you like and ignore what doesn't work for you.

Get Closer and Look Up: You don't always have to stand at a distance to take pictures of the fall foliage. Why not just walk up to a tree and start taking close up pictures? That is a great way to get very nice shots of groups of leaves or a single leaf. Getting closer will allow you to show the small details of the leaves in addition to the colors.
One thing to keep in mind when pointing your camera up when taking pictures of leaves on a tree is that because of the light from the sky, the image might be underexposed. (that is from being back lit) So you might have to adjust your camera's exposure setting to get it exactly right. The easiest way to adjust the lightness or darkness of an image is to use the camera's Exposure Compensation EV+ - setting.

Look Down: Many people get so wrapped up in the beautiful colors of the fall leaves on the trees, they might not pay attention to the leaves that have already fallen to the ground. Leaves on the ground also make nice subjects for fall foliage photography.
That is especially true if you see one leaf, or a few fallen leaves that are a totally different color than the ones around them. (as seen in picture #7) Leaves that have fallen or have been blown away from the rest of the leaves are interesting as well. (as seen in picture #8)

In any case, you should try to compose the picture in an interesting way. And if you need to pick up a leaf from one place and put it in a different place to make a better picture, who's going to know? 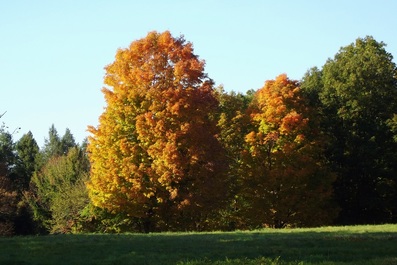 Fall Foliage Image #9
Light/Shadows/Time of Day: A good amount of sunlight will make your fall foliage pictures appear brighter and the color more vivid. However, when
you are taking pictures on a sunny day, you should pay attention to where the shadows are falling in the scene. Shadows in a scene will show up darker in a picture than we notice with our eyes.

Take a look at picture #9. As you can see, the left side and upper portions of the subject trees are pretty well lit by the sun.

However, most of the right side and lower portions of the trees are in shadows.The image is not a disaster, but it probably would look better if the lighting was a little more even throughout the picture.

In this case, one solution would be to move to a position where the sun is behind you. From that position, the trees would probably be more evenly lit.

You won't always be able to move to an ideal position for lighting when taking pictures outdoors. However, you can make a mental note of the time of day that you think the sun would be in the best position to produce the light you want for the scene. If possible, come back to take your pictures at that time.

While it is impossible to avoid all shadows when taking pictures outdoors, try to make sure that the main area of interest in your picture is lit well enough for your taste.

A nice time to take pictures of fall foliage is an hour or so before sunset, or an hour or so after sunrise. These times of the day are often referred to as the "Golden Hour(s)"  At those times, the light is softer with less contrast and the shadows are not as hard edged as they are at mid day.

During the Golden Hour(s) the sun is closer to the horizon and will cast long shadows. So once again, be aware of how the shadows are falling if the sun is not shining directly on the scene you are photographing.

Logic dictates that you won't always be ready to take pictures of fall foliage during the Golden Hour. So if you want to take your pictures at a different time of day when the sun is higher in the sky, just go for it. 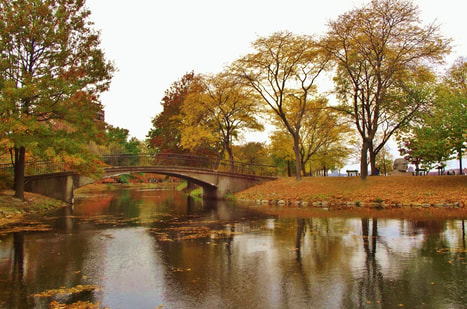 Fall Foliage Image #10
Cloudy, Overcast Days: You may think that cloudy days would not be good days for taking pictures of fall foliage, but that is not really true.

On very cloudy/overcast days the overall lighting is very even. That practically eliminates the need to worry about shadows or areas where the contrast is too high in your pictures.

The colors in your cloudy day pictures of fall foliage will show just fine. The overall image might appear a little more subdued than a picture taken on a bright sunny day, but the colors and tones will be seen clearly.

Take a look at picture #10. It was taken on a very overcast day, but it is obvious that the picture was taken in the fall when the colors of the autumn leaves were changing.

One last thing to remember about taking pictures of fall foliage is to try and take your pictures when the colors are at peak and before too many of the leaves begin to fall off the trees. Picture #10 still shows much of the fall foliage color, but a week after this picture was taken, some of those trees were practically bare.

Adjusting the Color in your Fall Foliage Images: Depending on which camera you are using, the colors in the scene might not record as bright and colorful as you like. Check your camera and see if you have a setting like "vivid color" or something similar. That setting will produce deeper richer colors in your images.

Another way to enhance the colors in your pictures is to use a photo editing program like Corel Paint Shop Pro after taking your pictures.