​What is a Bridge Camera? A Bridge camera is a compact digital camera with more advanced features than a Basic Compact Digital Camera.

They are called Bridge cameras because they fill the gap between basic compact digital cameras and Digital Slr type cameras. That is, as far as having access to, and being able to control more of the camera's features and functions. ​

Many of the Bridge cameras in today's market have lenses with extremely long focal length ranges and are called Super Zoom Cameras. However, a camera does not necessarily need an extremely long focal range to be considered a bridge camera.
​In addition to a full automatic mode, most Bridge cameras have manual and semi automatic exposure modes which allow the photographer to control the camera exposure settings the same as with Digital Slr cameras and Mirrorless cameras.

The Sony Cyber-Shot HX80 Bridge camera shown above has a shape similar to a basic compact camera but most Bridge cameras like the Canon Powershot SX70 65x Super Zoom shown above, have the same basic shape as a Digital SLR camera

Super Zoom Cameras: Most of the Bridge cameras in today's market are also known as "Super Zoom" cameras. Super Zoom cameras have lenses that can be zoomed from very wide angle to long telephoto focal lengths. Super Zoom camera lenses may have lens focal length ranges of 20X, 40X, 50X or more.
​
​Super zoom camera lenses are great for taking closer shots of subjects that are pretty far away without having to physically move closer to the subject. Super zoom cameras are great for getting wildlife shots of animals that you can't or don't want to get close to. They are also good for taking wide angle shots of landscapes and then zooming in to get a closer shot of a particular area.
​
The 2 pictures shown above were taken with a camera that had a zoom range of about 20X. Picture #1 was taken with the lens at its widest (shortest) focal length of 5mm.  Picture #2 on the right was taken at a 90mm focal length which is pretty close to that lenses longest focal length.

Take notice that picture #2 is a closer shot of the ball shaped object on the top of the building that is barely visible in the wide angle shot. (picture #1) As you can see, the lens on a zoom camera can be a pretty versatile tool.

Also keep in mind that the zoom range on the camera used for those images is at the lower end of the Super Zoom lens range. A camera with a 40X, 50X or higher would be able to zoom in on scenes or objects much further away than what is shown in the above example.

Super Zoom Camera Lens Focal Range: The zoom length range of digital cameras are often advertised as 5X, 20X, 50X etc to keep the information about the lens focal range simple. However, every zoom lens has actual focal lengths that are expressed in millimeters.

For instance, the Sony Cyber-Shot DSC HX80 that was shown above has a focal length range of 4.1mm to 123mm which is its shortest to longest focal lengths. This camera would be advertised as having a 30X focal length range. (30 X 4.1mm = 123mm) You will probably also see the focal length listed in this camera's specifications as a 35mm equivalent 24mm-720mm lens.

35mm equivalent is a statement of what the lens focal length range would be if you were using one of the old 35mm film cameras. (read the tutorial  35mm Equivalent for more on this subject)

If you are thinking about a Super Zoom camera with a very long focal length range, please be aware of the following:

When using a super zoom camera lens at at its longer focal lengths, the subject or scene will be drawn in much closer and will be greatly magnified. No problem, since that is the the purpose of long focal length lenses. However, any slight movement of the camera can cause blur in an image when the picture is taken. Even when the lens is focused.

Also, depending on the quality of the lens, it is not a good idea to take pictures at the lens maximum zoom length. In some cameras there may be distortion around the corners or edges of the image when the zoom is right at its maximum.

Experiment by moving the lens to its maximum zoom and then pulling the zoom back slightly. That may eliminate any or some of the distortion in many cases.

Additional Bridge/Super Zoom Camera Features: The following are a few extra features usually found in Digital SLR and Compact System cameras that may be available in some, but not included with every Bridge camera. It is up to you to decide if these features are important to you if you plan to purchase a Bridge camera. ​ 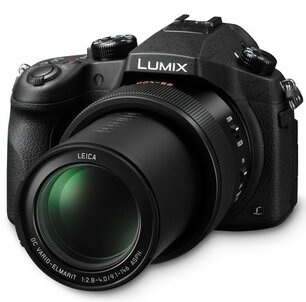 ​However, some Bridge cameras such as the Panasonic Lumix FZ1000 II have larger image sensors that will produce higher quality images. (the zoom range is 16X)The quality of images taken in low light situations by a camera with a larger image sensor will be better.

Also, pictures taken with a camera that has a larger sensor can be made into larger prints and the decrease in sharpness will not be as noticeable. (compared to a camera with a smaller image sensor) 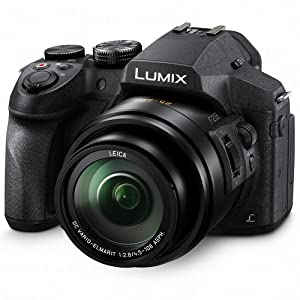 Panasonic Lumix DMC FZ 300 Bridge Camera
Hot Shoe Attachment: Just about all cameras will come with a pop up flash for use in low light situations. Pop up flashes are good for lighting small areas but may not be powerful enough for some situations.
​
A hot shoe attachment allows you to attach an external, more powerful, and possibly more versatile flash. The Panasonic Lumix DMC FZ300 bridge camera comes equipped with a hot shoe attachment.

Eye Level Viewfinder: Some Bridge and Super Zoom cameras are equipped with eye level Electronic View Finders. (also known as EVF) The electronic viewfinder is located at the back of the camera where you can place the camera directly up to your eye to view the scene or subject you are about to shoot.

Placing the the camera up to your eye and holding it with both hands gives the camera a little more stability when taking a picture. That is, compared to holding the camera away from your body and viewing the LCD screen when taking the shot.

Also, it may be difficult to see the subject you are about to photograph on the camera's LCD screen in bright light situations.

You won't have that problem when the electronic viewfinder is being used. The Panasonic Lumix DMC FZ300 shown to the left comes equipped with an eye level viewfinder.

Pricing: The average Bridge/Super Zoom camera is less expensive than most Digital SLR cameras. However, there are higher end Bridge cameras that can cost around the same if not more than a lower end Digital SLR camera.

Raw Shooting Mode: Another Digital SLR type feature found in some Bridge cameras is the "RAW" mode setting. Pictures taken in the RAW mode retain more digital information about the image which is useful to those who prefer to do post processing or editing of their images.

Summary: The more advanced features found in Bridge/Super Zoom cameras are designed for photographers who may have outgrown just using a basic compact camera. A bridge camera has most of the basic features found in a Digital SLR without the higher price. They are smaller than Digital SLR cameras and are more convenient to carry around.

Also, try to figure out whether you will need a camera with a 60X (or more) zoom lens, or would a 30X lens work well for most of your picture taking situations.

Overall, if you have already been taking pictures with a basic compact camera and want more control of the camera's features to go along with your creativity, a Bridge or Super Zoom camera might be for you. ​