Before choosing a camera many people will ask, what is the best camera to buy?, or what camera should I buy? While those are logical questions to ask, it is more important to first know what types of digital cameras are on the market. Take a look at each of the categories below and you should be able to determine which is the best type of camera for you.

This tutorial will give you general information about the different types of digital cameras on the market for consumers. If you need a little more detailed information about each type of camera, check the tutorial for that specific camera category.​ 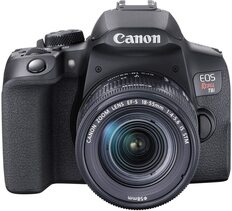 The first thing you will notice about a Digital Single Lens Reflex camera is that it is larger than any compact consumer camera and putting one in your pocket is out of the question. The Canon EOS Rebel T8i or the Nikon D3500 are examples of good quality affordable Digital Slr cameras.

The most important thing to remember about using a Digital Single Lens Reflex camera as compared to a basic compact camera is that you have more control over the way the picture will be taken as far as exposure settings.

When using a Digital Slr camera you can set the camera to the automatic mode and just start taking pictures. However, you also have the option of taking pictures in the full manual mode, Aperture Priority, Shutter Priority, or program modes. Those modes give you more control over the exposure of your images as well as better creative control.

Another important feature of Digital Slr cameras is that you can change the camera lens to fit different situations. For instance you can use a fixed focal length 28mm lens for wide angle scenes. You will also have the choice remove that lens and put on a 200mm fixed focal length telephoto lens to pull the scene in closer. Digital SLR cameras also allow you to use a variety of zoom lenses with different zoom ranges.

​The lenses for Digital Slr cameras will generally be of a better quality than those found on compact cameras which will result in better image quality. Read the tutorial, Camera Lens Types for more details about the importance of the camera lens.

​Another important difference between Digital Slr cameras and compact cameras is the image sensor size. Digital SLR cameras have larger image sensors which will generally produce better quality images. If you are not familiar with camera image sensors, please read the Digital Camera Image Sensors tutorial. 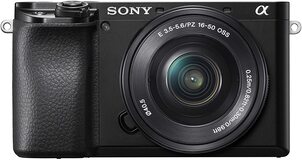 Sony Alpha a6100 Compact System Camera
​You have probably figured out, by the name interchangeable lens, that the lens can be changed just like on a Digital SLR camera. The biggest difference between the two types of cameras is that Mirrorless cameras are much smaller than Digital Slr cameras.

Their camera body size is closer to the size of compact cameras. The reason the body size is so much smaller is because they do not have optical viewfinder systems like the Digital Slr cameras.

Optical viewfinders that are found on Digital Slr cameras use a system of mirrors and pentaprism to allow you to view the scene that will be photographed. Mirrorless interchangeable lens cameras do not have a mirror system.

They are equipped with an LCD screen and/or Electronic Viewfinder for previewing the scene that is about to be photographed. The mirrors in a Digital Slr camera take up a lot of space in the body of the camera, so the elimination of the mirrors allows for a smaller body to be used for the compact system camera. (similar to the Sony Alpha a6100 shown above)

Mirrorless cameras also have larger image sensors than compact cameras which will result in image quality similar to that of many of the non professional Digital Slr cameras. However, the image sensor on some Compact System Cameras is slightly smaller than the image sensors found in Digital SLR cameras.

Overall, Mirrorless cameras should appeal to those who want to take pictures that are Digital Slr quality in a much smaller sized camera. For more details about these type cameras, read ﻿Compact System Cameras.
﻿
As you can see, there is a variety of different types of digital cameras available. Hopefully, this tutorial will be the first step in helping you decide which type might be the best camera fit for you. 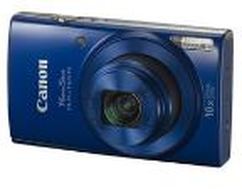 Canon Powershot Elph 190is
​Compact Digital Cameras: Digital compact cameras, which are also known as Point and Shoot cameras, vary in features, price, and styles. Their smaller size and ease of use is the main appeal of these types of digital cameras.

Most basic compact cameras will fit in a pocket or small purse. All of the current compact cameras have a minimum three time (3X) zoom lens and at least 12 megapixels. With that many megapixels, great looking, quality images can be enlarged to 16 X 20 inch print size.

Today's digital compact cameras are equipped with a fully automatic mode which is great for beginners or those who just want to "point and shoot" when taking pictures.

In addition to the automatic mode, digital compact cameras come equipped with a number of scene modes such as landscape, portrait, sports and fireworks among others. Those scene modes make it easy for the photographer to adapt to different types of picture taking situations without having having to manually choose the best exposure settings to fit the scene.

Manual adjustments to camera settings like the shutter speed or lens aperture setting can't be done on a basic digital compact camera. Those functions are set automatically when you take the picture. So once again, compact cameras are made for ease of use rather than giving the photographer full control over every camera setting.

The average casual photographer can get great pictures from a basic compact digital camera and there usually won't be a need for manual adjustments. The Canon Powershot Elph 190IS pictured above is a great affordable digital compact camera.

​Check the tutorial, Compact Digital Cameras for more detailed information about the features of some of the basic compact cameras on the market.
Cell Phone Cameras: Everyone has a cell phone and not too many years ago, cell phone cameras wouldn't be included in a discussion of different types of cameras. That is because their image quality left much to be desired and their features were pretty limited.

Samsung S20 FE
However, the quality of the images taken by camera phones has increased dramatically and the higher end models have many of the features and editing capabilities found in regular digital cameras. As the image quality and features in cell phones continues to drastically improve, it wouldn't be a stretch to say that they could eventually replace the above mentioned compact cameras.

Camera phones have touchscreens that you can use to set the primary focus area as well as to set the exposure for a particular area of the image. They also have zoom capabilities that vary depending on the phone model. The newer camera phones have multiple lenses which help to increase maximum zoom focal lengths and the quality of the zoomed image.

All camera phones are pre set to the automatic mode so you can just open the camera app and "point and shoot" to take pictures
Cell phone camera also have different shooting modes such as Panorama, night mode, video, "Pro" and/or advanced. In the pro or advanced mode you can manually set some of the exposure settings just like when using a Digital SLR camera. (depending on the type and model of the phone).

Last but not least, camera phones have built in photo editing apps from which you can adjust the exposure, use color tone filters, and more.

So, a good quality camera phone is a useful too for a casual amateur or an advanced photographer who might always want to have a camera to catch those spur of the moment shots. Check the tutorial Camera Phone Photography for more on camera phones. 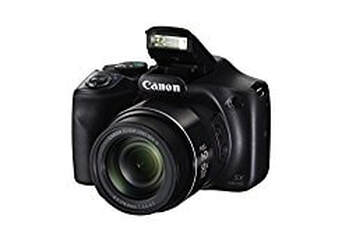 Canon Powershot SX540
Bridge/Super Zoom Cameras: The main difference between Bridge cameras and Basic Compact cameras is that they allow the photographer to have more control over the camera's exposure settings. Bridge cameras will have the following semi automatic modes: Aperture Priority,Shutter priority, and Program modes.

Most will also have a Manual mode that will allow the photographer to have full control over the camera exposure settings.

Most bridge cameras are larger than basic point and shoot cameras but are smaller than Digital SLR cameras. Some bridge cameras have shapes similar to Digital SLR cameras, but many are shaped like digital compact cameras. (just slightly larger). Take a look at the Canon G9X Mark II as an example.
​​
Bridge cameras are great for photographers who want more control over the camera exposure settings and in some cases perhaps a longer zoom range. These features are available in Bridge Cameras without having to pay the higher purchase price of a Digital Slr camera.

If you think a Bridge camera might be the right fit for you, then check the Bridge Cameras tutorial for more details about the features of Bridge/Advanced cameras.