The Camera Shutter and Shutter Speeds

The function of the camera shutter is to open and then close after a specific length of time so that light coming through the camera lens may reach the image sensor. The characteristics (intensity and colors) of the light is read by the image sensor and those characteristics are reproduced as an image or picture. The length of time that the shutter remains open during an exposure (when the shutter release is pressed) is called the shutter speed.

The Camera Shutter and Exposure: The camera shutter, lens aperture, and iso settings work together to produce images that are "correctly" exposed or exposed to the photographers preference. Those three functions are commonly referred to as the "Exposure Triangle". Check the Camera Exposure Basics page for more on how they work together

Shutter Speeds: As was previously mentioned, the length of time the camera shutter stays open during an exposure is called the shutter speed. The shutter speed is usually expressed in fractions of a second as shown below although the time can be longer during some exposures.

Any increase or decrease in the shutter speed will cause the image to be lighter or darker. That is, as long as the lens aperture and ISO settings remain the same. Images will be lighter as the shutter stays open longer to expose the light to the image sensor.

​Shutter Speeds and Motion: In addition to allowing light to reach the image sensor, the camera shutter will affect how any motion in a scene will appear in your image. Motion in a photo image can be "frozen" or appear as blurred. Take a look at the pictures of the 2 cars below.​​
​The car in picture #1 was moving around 30 mph. Notice that just about everything in the image is in focus except the car. This is an example of what is known as motion blur.

The car is not in focus because the shutter speed of 1/60 sec was not fast enough to "freeze" it's motion. In some cases this type of blur might be desirable because it actually conveys a sense of motion. However, if you want your moving subject to be in focus, you will need to use a faster shutter speed that will freeze the motion.

Slower Shutter Speeds:  It is important to note that when you use very slow shutter speeds, (1/30 second or slower) it is a good idea to use a tripod. Camera shake and the blur that comes with it increases greatly at slower shutter speeds. When the camera is hand held and a very slow shutter speed like 1/15 second is used, there is a strong possibility that the whole image will be out of focus due to camera shake. Check the Night Photography tutorial for more on this subject.

​Choosing a Shutter Speed: If there is motion in a scene that you are photographing, the best shutter speed to use will vary depending on the speed of that motion, or the desired effect of the motion. (subject frozen or blurred) Listed below are some common picture taking situations and shutter speeds that can be used as starting points.* 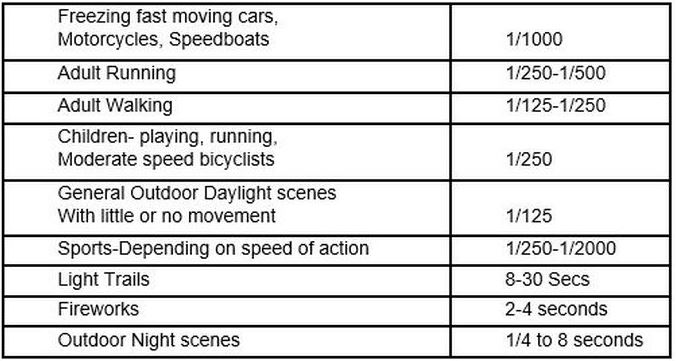 ​*Depending on the available light, adjustments to the lens aperture and ISO settings may be required to use the desired shutter speed. Check the Camera Exposure Basics tutorial on how adjustments may be made.

There may be times when a slow shutter speed is more desirable or necessary, especially in low light situations. A couple of situations that would require a slower shutter speed would be a fireworks display or night pictures at an amusement park. (see pictures #8 and #9) In these cases a very slow shutter speed, coupled with motion make for fun and interesting pictures.
If you are using a Digital SLR camera, like the Canon EOS Rebel T6, you will be able to set the shutter speeds manually. You will also be able to manually set the camera shutter speed if you are using an advanced compact camera like the Sony Cybershot WX500 or any of the new Compact System Cameras.

All of the cameras that were just mentioned also allow you to manually set the lens aperture, ISO setting, and many other features so that you have more creative control over your pictures.

The camera will automatically set the best shutter speed for that type of scene. Please see the tutorial on Automatic Shooting Modes for a little more on that subject.

Hopefully, you now have a good understanding of the camera shutter function. Practice using the various shutter speeds to fit the situation, then add your own creativity and your pictures should be fine!